They can be booked for all kinds of affairs, from private barn dances to public festivals.

Keith is an expert on Pennsylvania German music, dance, instruments, and folklore. He plays a variety of string instruments, tells some of the world's best stories and jokes, and does lively kid's shows. He calls and teaches hoedowns, and leads the Toad Creek Ramblers (who play an even greater variety of instruments, as there are more of them.)

At Christmas, he IS the Belsnickel, the Pa. German Santa Claus.

Contact us via email at keithbrintzenhoff@gmail.com or via phone at 484-336-9639

What folks are saying!

Half the band for half the price! More jokes and stories with autoharp, guitar, and banjo or fiddle. Almost too much fun for only two guys!

Keith Brintzenhoff was a Commonwealth Speaker for the Pa. Humanities Council (and in their TV series) for 10 years His topic was Pa. German music, dance, instruments, culture, folklore, and language. He was, and still is, a school teacher, with a B.A. in Sociology from Albright College, and a Masters in Elementary Education from Kutztown University (and many more credits). He taught Pa. German language (with culture, folklore, and history) as a 3 credit course for 3 years at Kutztown University. He studied autoharp with some of the best in the world, and was consultant for the one built by Folkcraft Instruments of Connecticut. He has investigated the mountain dulcimer and it's Pa. German connections, and discussed this with the researcher who did his doctoral dissertation on this instrument. He also plays guitar and banjo. He is musical advisor for the Kutztown Folk Festival, founder, emcee, music coordinator, and band leader for the Berks Fiddle Fest, as well as a performer. Included in his many performances are: Hershey Museum; Historic Schaefferstown; Der Dutch Peddler Homecoming (Ohio);Berks County Heritage Festival; Lyons Fiddle Festival; Mayfair; Mercer Museum Folk Festival; Reading Liederkranz; Landis Valley Farm Museum; Musikfest (Bethlehem);SEVEN tours in Germany (some with partner and/or band);700th anniversary of Switzerland Fescht in his ancestral home town of Brenzigkoffen;. Included also are many appearances on radio and TV, in the US and Germany, plus 3 C.D.s, and music for several videos and films.

From mostly educational to mostly entertaining, see and hear in person the music, instruments, and dance of the Pennsylvania Germans, using guitar, autoharp, mountain dulcimer, banjo, spoons, nose flute (?), and a few others. Edification, entertainment, and amazement with stories and songs.

Have a private or public hoedown/square dance/barn dance with live music (or CD). Simplified instructions to complex dances, small or large groups, good in school programs. 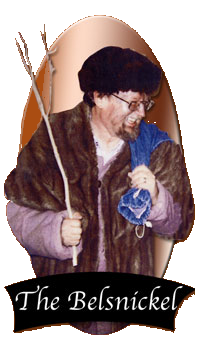 The PA Dutch Santa Claus, a mean and cranky old guy, with switch and a bag of goodies. Just like they did it in the good old days, spoken in PA Dutch (with English translation.)

Heavy on the acting, light on the humor.

All above programs include string instruments (autoharp, banjo, mountain dulcimer, and/or guitar, depending on the program), education, and humor

Public classes offered occasionally at various sites in Berks County, and private ones also possible. Please contact me directly by email or phone.